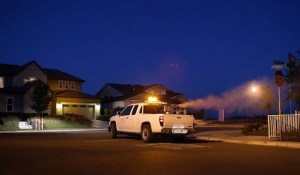 From this week’s Newsweek:

On September 21, at around 9 p.m., Keegan Stephan was biking home through the Sunnyside neighborhood of Queens, New York, when he decided to stop at a Mexican food truck to grab a quick dinner. As he waited in line with about five other customers, a police car crept by, warning pedestrians through a loudspeaker to get indoors immediately because pesticides for West Nile virus control were being administered. A truck trailed behind the police, spraying a fine mist into the air.

Local governments are supposed to give residents ample warning that pesticides will be sprayed in their area. A spokesman from the New York City Department of Health and Mental Hygiene tells Newsweek, “Our team does not spray in the presence of residents.” Yet as his food was being prepared, Stephan watched a thick cloud of pesticides waft up and then land on him and his fellow customers. “They sprayed people and food in the open air,” he says. “They literally gave us seconds to go anywhere because the truck was right behind the cop car.”

West Nile is usually transmitted to humans when an infected mosquito bites them. In rare cases, it can lead to serious neurological illnesses, such as encephalitis. However, according to the Mayo Clinic, fewer than 1 percent of people who are infected become severely ill. About 70 to 80 percent of people infected will never display symptoms, and many others experience only mild flu-like symptoms. In addition, the average person’s risk of contracting West Nile is extremely low; even in areas where the virus is present, only a very small number of mosquitoes carry the virus. In 2015 (as of September 29), there have been just 17 reported cases of West Nile in the state of New York and one death out of a population of about 20 million people. Nationally, there have been 1,028 cases and 54 deaths out of more than 320 million people.

Sprayings, on the other hand, are very common; the NYC health department sprayed neighborhoods across the city 22 times from June through September this year, and New York is just one of many places in the U.S. where pesticides are sprayed widely. Across the country, from counties all over California to Chicago and Dallas, communities and residential areas are being sprayed with an array of pesticides for mosquito control.

Public health agencies insist the sprayings are effective and an overall public health good: “Mosquito [pesticides] have been shown to be effective in reducing mosquito populations, the number of [West Nile virus] positive mosquito pools and preventing human cases of [the] disease, which provides a net economic benefit,” a health department spokesman says in an email to Newsweek.

However, it’s not clear how effective these efforts are in stymying West Nile. Most cities and counties use what is known as “ultra-low-volume spraying,” which sprays a fine mist of pesticides from trucks or planes. According to a report by Cornell University professor emeritus of ecology and evolutionary biology David Pimentel, the average mosquito kill rate when this method is used is only 21 to 45 percent. Research also shows that many pesticides end up killing or harming a lot of other species, including some that help to keep mosquito populations in check: birds, dragonflies and bats, for example. There’s also the well-documented problem of mosquitoes developing a resistance to commonly used pesticides.

Then there’s the much larger issue of human safety. The pesticides typically used are organophosphates, carbamates or pyrethroids—and they are likely endocrine-disrupting chemicals (EDCs), which are known to interfere with or disturb our natural hormonal systems. Government officials say the health risk posed by these chemicals, when used in mosquito sprayings, is minimal since people are being exposed to only low doses. For example, the NYC health department website says, “For these sprayings, the Health Department will use a very low concentration of Anvil 10+10, a synthetic pesticide. When properly used, this product poses no significant risks to human health.” The department, along with health agencies in cities such as Chicago and Dallas, points to prior regulatory consent for the chemicals it sprays, citing Environmental Protection Agency (EPA) approval and Centers for Disease Control and Prevention (CDC) mosquito control guidelines.

But researchers who study pesticides say the assessment protocols that the EPS uses to determine whether a chemical is safe are fundamentally flawed. The major assumption used in these safety assessments is that if you expose animals to high doses of a certain chemical, you can extrapolate any effects that you see to smaller doses but eventually land on a dose where the exposure is so low that there are no harmful effects, says Laura Vandenberg, assistant professor of environmental health science at the University of Massachusetts, Amherst. But, she says, there is “a large amount of literature on endocrine disruptors challenges this practice.”

The way EDCs and many other chemicals are currently evaluated for safety is based on the principle of “the dose makes the poison.” Bruce Blumberg, professor of pharmaceutical sciences and developmental and cell biology at University of California, Irvine, says, “This idea that there’s some threshold beneath which any given chemical is harmless is probably not true.”

What’s more, Andrea Gore, a professor of pharmacology at the University of Texas at Austin, says the EPA does not test at low doses and “virtually never” looks at effects of exposure during child development. “We know that vulnerability during development is so much higher that you really do need to look at fetal exposure,” she says.

The unborn children of pregnant women, babies and children are at heightened risk since many common pesticides are more harmful at crucial windows of development. A major 2014 study found that women who were exposed to pyrethroid pesticides (the pesticide sprayed in New York City this summer was sumithrin, a pyrethroid) both before conception and in the third trimester of pregnancy had increased odds of their child displaying autistic spectrum disorders and developmental delay. It also found that pregnant women in their second and third trimesters exposed to organophosphate pesticides—like chlorpyrifos, which is often used in mosquito sprayings—had an increased risk of having a baby with autistic spectrum disorder.

In fact, the EPA has banned chlorpyrifos from residential use and is considering banning it in agricultural contexts as well. In Gore’s laboratory model, she found that exposure to chlorpyrifos resulted in impaired reproductive function and infertility. It’s also a known neurotoxin and has been implicated in mental development delays and attention problems in children.

In a 1998 study done at Mount Sinai School of Medicine, researchers found that sumithrin demonstrated significant estrogenic activity at relatively high doses and “may contribute to reproductive dysfunction, developmental impairment, and cancer.” But that doesn’t mean low-dose exposure doesn’t matter. Vandenberg, who was not involved in that study, says since sumithrin is not water soluble, it can persist in the fat cells in our bodies, meaning that it can build up in our tissues with repeated exposure. In a 2006 review of the literature on pesticides, researchers found that over time, exposure “may be associated with menstrual cycle disturbances, reduced fertility, prolonged time-to-pregnancy, spontaneous abortion, stillbirths, and developmental defects.”

The NYC health department says its workers “ have been adulticiding and larvaciding since 1999 and have had no reported illnesses associated with our efforts.” But studies that evaluate the health effects of EDCs look for subtle and long-term changes, like the loss of fertility months after exposure, abnormal social behaviors or disruption to brain development, Vandenberg says. These effects often don’t appear until months, years or even decades later. For example, animal and cell studies of the now-banned pesticide DDT predicted increased risk for breast cancer. But it took more than 50 years to complete a study that found exposure in the womb to DDT was associated with increased breast cancer rates in women.

“This is the question of risk-benefit analysis,” says Gore. “What’s the balance of one or two people dying from West Nile verses 100,000 people, or half a million people in Brooklyn being exposed to low levels of a chemical that may or may not cause endocrine disruption in their body? How do you do the formula? What’s the calculation?”

The NYC health department sent Newsweek a multitude of studies that found human health risk from pesticide exposure was minimal. For example, the department cites a 2004 study that found spraying for West Nile virus in New York City did not result in increased visits to the emergency room for asthma. But this speaks to acute exposure, not low-dose exposure or long-term effects. It also cites a CDC report looking at pesticide exposure in Mississippi, North Carolina and Virginia in 2002 and 2003 that found that pesticide metabolites in urine did not increase significantly in residents who lived in areas that were sprayed. But that CDC report also pointed out that “ occupational studies suggest that excessive exposure to these pesticides can cause serious health effects.”

The NYC health department also cites a 2008 study assessing human pesticide exposure in Florida in 2004 and a 2010 study undertaken in Sacramento County, California, both of which found the risk from West Nile to outweigh the risk associated with pesticide exposure. Those studies, however, appeared in the Journal of the American Mosquito Control Association, an organization that represents corporations that manufacture pesticides for mosquito control, including, Clarke, which has a contract with New York City, as well as Orange County, California, and many other local governments.

On Friday, September 11, 2014, Prospect Park in Brooklyn, New York, was filled with people: children with parents, nannies with babies, pregnant women with toddlers in tow. In the early dawn of the previous day, the health department sprayed the park and surrounding neighborhoods with pesticides. Yet no signs to alert residents of the spraying were present. Several moms with small children in the park said they had no idea the park had been sprayed. The city posted notices on lampposts outside the park the day before the spraying, but they were removed by the following afternoon.

The active ingredient in the pesticide used by the NYC health department, according to a spokesman “generally breaks down quickly in sunlight and water and does not leave a toxic residue. Therefore, no special precautions or waiting periods are recommended for outdoor activities after the treatment.” However, according to the manufacturer’s label, while the chemical mix does degrade after nine to 14 hours in sunlight, it can also remain in the soil for 18 to 26 days after application.

There are viable and safer alternatives to indiscriminately spraying for adult mosquitoes; these include placing mosquito fish, which feed on the insects’ larvae, in bodies of water where they breed, as well as introducing or supporting the proliferation of other natural predators of mosquitoes. There are also bacterial agents that can be used to kill mosquito larvae, which appear to be far less detrimental to human health and the environment—and more effective—than spraying pesticides.

“The fundamental problem here is if you want to kill pests, the chemicals that kill them have some amount of toxicity for humans, no matter what the manufacturer tells you,” Blumberg says. “And they’ll say it’s safe based on this idea that ‘dose makes the poison’—but a lot of these chemicals have unexpected effects.”