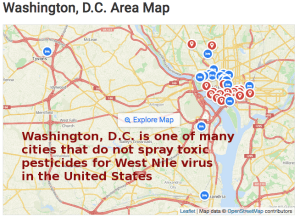 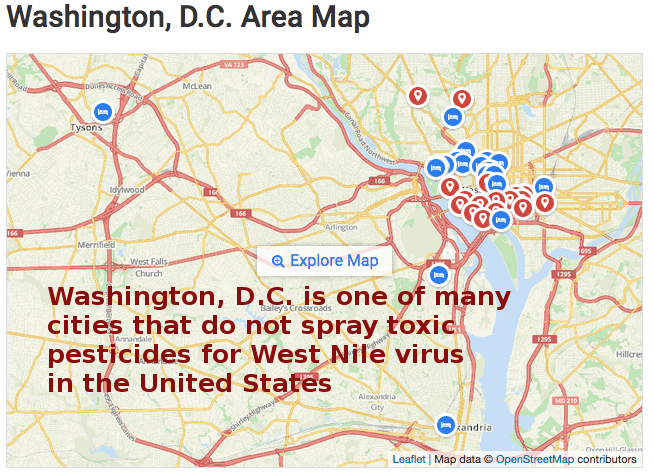 The No Spray Nashville group analyzed data based on statistics provided by the health departments at 14 major cities including Dallas, Fort Worth, Washington, D.C., Memphis, etc., determining that “results show no significant difference in West Nile virus rates between communities that spray and those that don’t.” (Data is from the years 2002 and 2003.)

Here is their analysis:

MORE DETAILS ABOUT THE COMPARATIVE ANALYSIS:

We looked at the human cases of West Nile virus in areas that spray versus those that don’t spray to see if there is any significant difference to help determine if the risks and expenses of spraying are worthwhile.
Populations based on 2000 Census. West Nile virus numbers are confirmed cases from state, city, CDC reports and phone calls for 2002 and 2003. Information was often double-checked with a second reference.

All of these communities have mosquito control programs in place that include come level of: surveillance, testing, selective larviciding and public education. In addition, they have used adulticides in 2002 and 2003 as a regular part of their program.

USE NO PESTICIDES (also called ADULTICIDES)

All of these communities have mosquito control programs in place that include some level of: surveillance, testing, selective larviciding and public education. Some also have door-to-door teams in place to deal with problem areas.

CONCLUSION: The data shows that there is no significant difference in the cases of West Nile virus in communities that spray adulticides compared to those that don’t but use other methods of mosquito control. Therefore, the risks and the costs of adulticiding do not outweigh the benefits.

The risks must always be weighed against the benefits. The benefits of adulticiding in these cities in the United States are not apparent in examination of these data.
* * *

Original No Spray Nashville page with analysis of the 14 cities can be found here.

See related information at Why Other Cities Have Chosen Not to Spray.