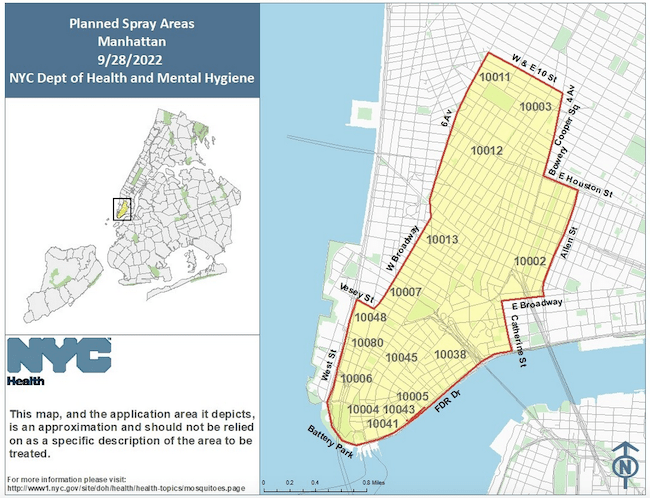 Areas to be Sprayed include Washington Square Park 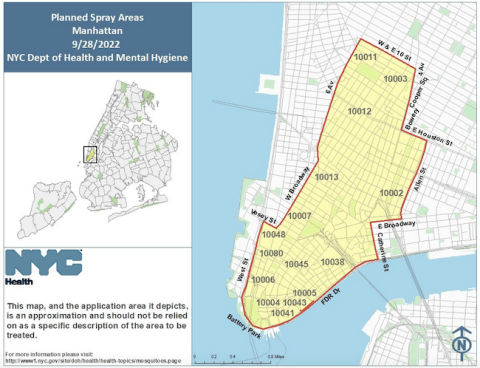 The pyrethroid pesticides being sprayed have been shown to be harmful to human health and the health of the eco-system, including animals, birds, wildlife, insects, and more. These pesticides kill off natural predators of mosquitoes, including dragonflies and bats. The spraying will occur by truck with pesticides fogged from the back of it.

Since its inception, this spray “program” to kill mosquitoes said to be carrying West Nile virus has never been properly reviewed by any city agency despite the continued use of toxic, harmful, and carcinogenic chemicals over the city’s population and environment.

The city is spraying pyrethroid pesticides, Anvil® 10+10 or Duet®, equally harmful, containing not only synthetic sumithrin but cancer-causing piperonyl butoxide.

In 2021, a new pesticides bill passed the New York City Council unanimously. It was intended to reduce the use of pesticides. Yet the NYC Department of Health continues to issue to itself waivers due to the provisions of the City’s anti-pesticides laws, thereby setting into motion the spraying of toxic pesticides in residential areas and public parks and streets.

The last few years have been especially brutal, as people fight to protect their lungs and respiratory systems from the Covid-19 virus, only to come under attack by the City’s poisonous spraying.

At the same time, there is no evidence presented that the City’s pesticide spraying has prevented West Nile disease (encephalitis). The risk of contracting West Nile Virus is very low, certainly not worth putting the entire population at significant risk and harming human health, wildlife, animals, beneficial insects, and our environment.

In fact, there is no evidence that the number of mosquitoes, let alone those that carry West Nile virus, has EVER been diminished by pesticide spraying. That may seem counterintuitive, but in fact studies show that mosquitoes come back after spraying in larger numbers than before, and many are now resistant to the pesticides. Meanwhile, the pesticides not only cause cancer and disrupt the endocrine system, but greatly reduced sperm counts — all follow in the wake of the pesticides.

In 2006, a federal judge ruled that the City of New York was in violation of the Clean Water Act, and by 2007, having lost its key points in the case, the City was compelled to negotiate a settlement with the No Spray Coalition.

Yet to this date the city of New York sprays on.

As part of the 2007 decision in the No Spray Coalition’s lawsuit, the City admitted, signed and in writing, stipulated that the pesticides:

The City has never performed a “thorough environmental review and epidemiologic analysis” of the pesticide spraying. Being sprayed in the face or caught in the fogging is considered “low level(s) of exposure.”

New Yorkers have filed numerous complaints; many of their pets died as well. And yet City officials have said they couldn’t find anyone sickened by the spraying despite evidence provided in Court by the Plaintiffs and thousands of calls to pesticide hotlines.

These are the same officials, agencies and Health Department that certified the air as safe after 9/11 and directed New Yorkers to return to contaminated residences, workplaces, and firehouses.

Toxicologist Dr. Robert Simon, who took soil samples from around the city following the first year of spraying and whose testimony in court was extremely damning to the city’s spray program, states: “The only solution is another lawsuit against the NYC Department of Health. They do not care what we think and will not respond unless a judge tells them to. The current spraying is the same pattern of disrespect for the law that they have shown since they started spraying.”

THERE IS NO SIGNIFICANT REDUCTION IN OCCURRENCE OF WEST NILE VIRUS FOR CITIES THAT SPRAY PESTICIDES VS. THOSE THAT DON’T SPRAY

The No Spray Coalition branch in Nashville, Tennessee analyzed data contrasting cities that spray, such as Dallas, Nashville, and Baltimore, and cities that don’t spray, including Washington, D.C., Charlotte, N.C., Cincinnati and Fort Worth, Texas, and released its report in 2012 based on statistics provided by the health departments of 14 major cities. Its conclusion: “Results show no significant difference in West Nile virus rates between communities that spray and those that don’t.”

IT IS TIME TO STOP THE MASS SPRAYING OF TOXIC PESTICIDES

Instead of chemical pesticides, many municipalities use bio-predators of mosquitoes, particularly dragonflies and bats, to control mosquito infestations, with successful results. But, in the end, the unnecessary mass spraying of toxic pesticides does more harm than good.

Beyond Pesticides Urges NYC Department of Health to “Avoid Adulticiding”