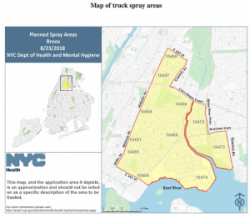 Bronx map of areas for pesticide spraying[/caption]Yet again, New York City will be spraying dozens of neighborhoods across three boroughs with toxic pesticides on Wednesday, August 22nd (rescheduled from the 21st due to rain) and Thursday, August 23rd. These pesticides contain chemicals which are known carcinogens and harmful to people, wildlife, animals, other insects and the environment.

This is the 19th year New York City has been spraying its population with pesticides to kill mosquitoes allegedly to “control” West Nile virus, and sometimes, the Department of Health says Zika, while previously admitting there is no reason to do so.

Again, pesticide spraying will take place between 9 p.m. and 6 a.m. The city will be spraying neighborhoods by truck with Anvil 10+10, a pyrethroid pesticide. The Department of Health advises staying indoors during this spraying.

All boroughs in New York City have been sprayed in 2018 this summer with the exception of Manhattan.

These spraying events were announced on the Department of Health West Nile web site August 18th, so more advance notice is being given than in previous years – something the No Spray Coalition pushed for for years. However, with so little media attention or notice given to the individual neighborhoods, many remain unaware and are being exposed to these harmful and toxic chemicals.