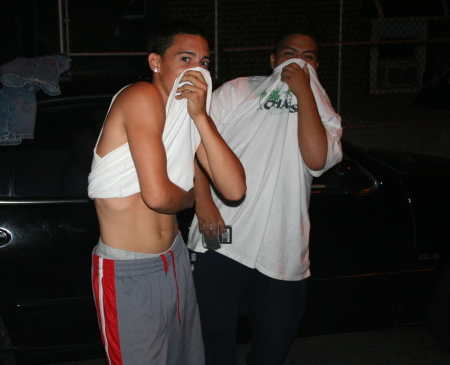 August 11, 2015 — The NYC Department of Health and Mental Hygiene (NYC DOH) renews its annual pesticide-spraying assault on the people of New York City tonight in Staten Island and Queens.

Areas of New Jersey are also being widely sprayed.

All mass spraying of pyrethroid and organophosphate pesticides are dangerous to human health (especially to children, the elderly, and those with weakened immune systems), as well as to pets, fish, and other animals. The spraying must be halted immediately.

Every year, the NYC DOH grants itself waivers from New York City Local Law 37, a law passed in 2005 in response to growing concerns over the health and environmental consequences of mass-spraying of Malathion (and other organophosphates) and Anvil 10+10 (and other pyrethroids, especially those containing the carcinogen Piperonyl Butoxide).

Only through application and granting of such waivers is the Department of Health enabled to legally conduct the pesticides spraying.

But the NYC DOH is circumventing the law. It applies for a waiver to itself, and then it grants itself pro forma the right and authority to spray deadly pesticides in NYC. No other agency reviews its application. The checks and balances envisioned in Local Law 37 are thus thwarted.

See, especially, a powerful review in City Limits of the waivers to Local Law 37, here.

The No Spray Coalition, which won its lawsuit against the City government in federal court in 2005 and achieved a settlement agreement two years later, is outraged by the spraying. The City’s Department of Health has failed to seriously consider:

a) the admissions it made concerning the dangers of pesticides in the 2007 stipulated Settlement Agreement with the No Spray Coalition, et al. in federal court; and

b) the 4 pillars for waivers in Local Law 37 (referenced also as a separate point in the Settlement Agreement).

These amount to a violation of the terms of the Settlement Agreement as well as key provisions of Local Law 37.

This year’s spray of choice is, once again, Anvil 10+10. It is listed in Local Law 37 as containing piperonyl butoxide and MGK-284. These are both “synergists” in Anvil 10+10, and they are both classified as possible human carcinogens by the EPA’s Office of Pesticide Programs.

Local Law 37 prohibits the use of pesticides by NYC in public places if they contain PBO and/or MGK-264. Why are they violating their own law?

“After years of litigation to stop this reckless spraying of pesticides which has contributed to skyrocketing increases in cancer and asthma, and now the collapse of bee colonies in the New York area, I am outraged that the New York City government is renewing its mindless criminal poisoning of the people and environment of our City,”

said Howard Brandstein, coordinator of SOS-FOOD, NY State Against Genetic Engineering, and a plaintiff in the federal lawsuit brought in 2000 by the No Spray Coalition and other organizations against the New York City government’s pesticide-spraying campaign. That lawsuit ended in April 2007 when NYC signed a settlement agreement acknowledging, among other stipulations, that pesticides:

The Department of Health contravenes that settlement by now stating that there are “no significant risks” of adverse impact to human health associated with the proper use of this product. Levi Fishman, deputy press secretary at the Dept. of Health, explained to City Limits reporter Elah Feder:

“When properly used, this product poses no significant risks to human health. It degrades rapidly in sunlight, provides little or no residual activity, and does not accumulate in the environment.”

Feder immediately pointed out that “nevertheless, the city advises residents to bring children’s toys, outdoor equipment, and clothing indoors before spraying takes place, and to wash anything that has come in contact with Anvil.” If there are no significant risks, why all that advice?

The fact is, the spraying puts many New York City residents and visitors at grave risk.

“These ignorant and lying politicians and bureaucrats apparently have no problem destroying our health in order to ‘save’ us from the so-called West Nile virus,”

“Clearly, the spraying jeopardizes a thousand times more people than the disease.”

The pesticide the City is spraying — “Anvil 10 + 10 — belongs to a class of adulticides known as pyrethroids, which are endocrine disruptors. They mimic hormones such as estrogen, and may cause breast cancer in women and drastically lower sperm counts in men. Pyrethroids have also been associated with prostate cancer, miscarriages and preterm delivery, asthma, toxicity to many vital organs including the nervous system, liver, kidneys and the gastro-intestinal tract, skin rashes, itching and blisters, and nausea and vomiting.

Anvil contains the cancer-causing chemical piperonyl butoxide, which the Environmental Protection Agency lists as a suspected carcinogen. It also contains Sumithrin — a synthetic toxin (not a naturally occurring pyrethrin), made in the laboratory — as well as dangerous benzene-related chemicals (which the label calls “inert ingredients.”)

Thousands of New Yorkers are severely sickened by the spraying every year, but they go unrecorded and unreported. Several members of the No Spray Coalition, including two of the plaintiffs in the lawsuit, died from pesticide-related illnesses. Many suffer from Multiple Chemical Sensitivities (MCS) or Asthma caused or exacerbated by the spraying.

The City administration must be made to understand that pesticides are extremely dangerous to human health as well as to the natural environment, and have long-term consequences.

The No Spray Coalition details the reasons for vacating NYC DOH’s waivers as follows:

The No Spray Coalition strongly urges the City to stop pesticide spraying immediately, reconsider its entire approach, and seek alternative, safe means to control mosquitoes. There are natural, safe ways for each person to ward off mosquitoes. The City should not be poisoning the entire population.

We call on the Mayor and City Council to hold the DOH in violation of the intent of Local Law 37 and other laws, and of the Court-mandated “Settlement Agreement” with the No Spray Coalition, et al., and urge City officials to stop the spraying NOW. Please protect the residents and visitors to New York and the natural environment from the extremely dangerous, unnecessary, ineffective and illegal mass spraying of toxic pesticides.

7 thoughts on “Stop NYC’s New Round of Pesticide Spraying, Now”